In the race to create a better lifestyle, secured economy, and progressive social structure, a handful of countries have fared better than the rest. The reason behind could be the impact of the industrial revolution, natural resource availability, social awareness, or plain and simple agile business tactics. But, the result definitely sets countries like US, UK, Germany, Japan, apart from the likes of India, Africa, Brazil, Indonesia.

One of the major factors influencing the development of a nation as such is energy. It’s no surprise that rising fossil fuel prices are keeping developing countries energy starved. And the lack of energy is putting road blocks on progressive ventures of developing nations. In a pursuit to get out of this bind, developing countries are resorting to renewable energy solutions.

According to media reports, within 2016, a total of $286bn (approx.) was spent on renewable power development globally. And of that amount, near about $131.56bn was spent by developing countries like- India, Brazil, China. So, it is fair to assume that developing countries have selected renewable energy as their new White Horse and they are betting big on it, much more than developed nations, to come out of the ‘Energy Rich’ race.

However, developed countries are not backing out of the game either. According to media reports, decreasing investment in fossil fuels ($130bn globally) proves that developed countries are making strides to follow the energy shift as well. However, since their social, and industrial framework is much more advanced and largely dependent on fossil fuel, it is comparatively hard for them to instantly shift to renewable energy. On the other hand, as developing countries are still scaling stages of development, it is easier for them to consider going green.

So, are developing nations selecting renewable energy just because the transition is easier for them? No. Fossil fuels are still the primary energy source for developing countries. And with costs getting higher, it is a necessity for developing countries to find a replacement. However, an energy source has to be cheaper and more available than fossil fuels to replace it. And fortunately, with all those attributes, solar energy is quickly becoming the preferred energy source for a sustainable future. The increasing global acceptance of solar energy is also bringing along the opportunities for profitable business, serving supply and demand dynamics.

In the picture below, comparing the economic structure of developed countries with developing ones, it is easy to understand that developing countries are going all in with green energy. 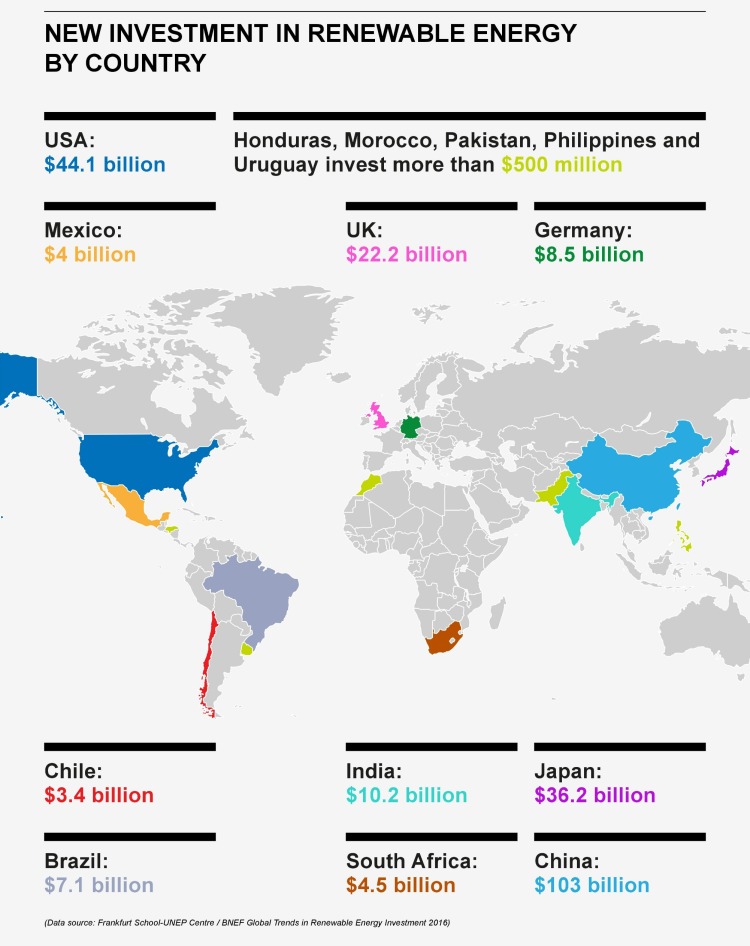 For example- the rate of return on solar projects (average) in Africa is 10.3%, in the Middle East 10.4% and 8.4% in Asia. This perfectly illustrates how Governments of developing nations are supporting solar energy transition and drawing developers. And these initiatives are serving as a staging point for infrastructural development and job creation. Solar industry has created 416,000 jobs in India in 2015 and 1,017,800 jobs are expected to be created within 2022. Brazil has hopes of creating 60,000 to 90,000 new jobs by the year 2018.

In India, the Government is developing business ties with investors, developing Indian solar sector into an INR 15 trillion worth market. With the support and opportunity, solar sector has made quantum leaps from having 160 MW in 2010 to reaching 9 GW (approx.) in 2016. This expeditious development is expected to take India’s energy mix to 12.5% by 2025, offering a bigger chunk in the global market and making renewable energy cheaper than fossil fuel based energy.

So, it can be surmised that the reason behind developing country’s focus on investing in renewable energy (especially solar) is the sunny future it paints, bringing socio-economic security and the hope of a safer, brighter future.